Half marathon at night for children of Aleppo 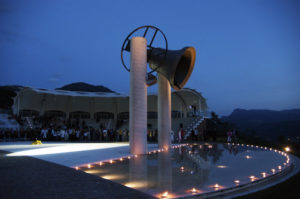 The start of the race is the Bell of the fallen, a symbol of peace. The 21 km for peace alongside two non-competitive walks of 10 and 5 km!

In its first edition, the 21 km for Peace promises an important sports initiative for Rovereto and Vallagarina.  Alongside the half marathon, the 10 km Walking for Peace, a walk with or without poles, and the 5 km Run Peace Family, suitable for families with children.

The Association SEV ASD, in collaboration with the Fondazione Opera Campana dei Caduti, promotes peaceful unity of peoples through a half marathon for peace along a new path that involves the entire city and the old town with its beautiful architecture and natural.

The departure is from the Bell of the fallen, a symbol of peace, unity and harmony among all peoples, which, with its 100 tolling in remembrance of wars around the world, a unique and charming atmosphere to the start of the race.

The proceeds will be donated to Non-profit associations in support of peace projects to benefit children of Aleppo, Syria: the Association Pro TerraSancta/Ong Onlus and the Association Hope – Hope For Children Onlus.

The path of the half marathon

The first 9 km are mostly downhill and winding on the southern outskirts of the city. From 9° to 14° km climb following the river Leno until arriving in the upper part of the town. The last third of the race consists of a slight ups and downs in the streets of the old town of Rovereto.
The arrival of competitors is expected at the Municipal swimming centre, where there will be the "Village Peace Run", meeting point and feast at the end of the race.

The route follows the second half of the route of the half marathon, the first 4 km up the river course Leno to get in the upper part of the town of Rovereto, the second part runs in the most typical streets of the historical center of the city.

In the first 2 km climb following the river Leno until arriving in the upper part of the town. The second part runs in the most typical streets of the city.